After a several month flying hiatus during the foggy and cloudy Vancouver winter, the weather finally turned up and gave me a chance to get back into the air. Something I had been meaning to do for some time was get some mountain flying experience, and given the sudden occurrence of unlimited ceilings it seemed like as good a time as any to take a maiden voyage into the mountains. I loaded up ForeFlight on my iPad and planned a flight up to Pemberton via Squamish then back down via Lillooet Lake/River and Harrison Lake. Here is an approximate SkyVector plot of the planned route:

I also created a very basic “flight plan”, basically a document that I create and review a couple days in advance of the flight then print and carry during the flight mostly for sanity checks. Here is a link to it: https://docs.google.com/document/d/1OzFW_Mt8YZfrX8dihitYaE258X-kxGCOBpYp_gVo08Y/pub

Mike, the check pilot who performed my most recent check ride, offered to come along for the flight and I was grateful to accept his offer. He is a very experienced pilot and I was more than happy to have him along for the flight, not just for his great company but also for the opportunity to absorb as much wisdom as I could from the veteran pilot of 30 years or so.

The departure from runway 25 was smooth and we were given a left turnout towards Nikel before the turn to Alex Fraser. After the bridge, we headed north past the Burnaby Hospital and SFU and up Indian Arm. I took the Cherokee 140 up to 5500' at a climb of almost 1000 FPM just under gross! Must be the aftermarket exhaust and higher compression pistons. Enroute to Squamish I had a chance to snap some shots up near the peaks of the mountains. 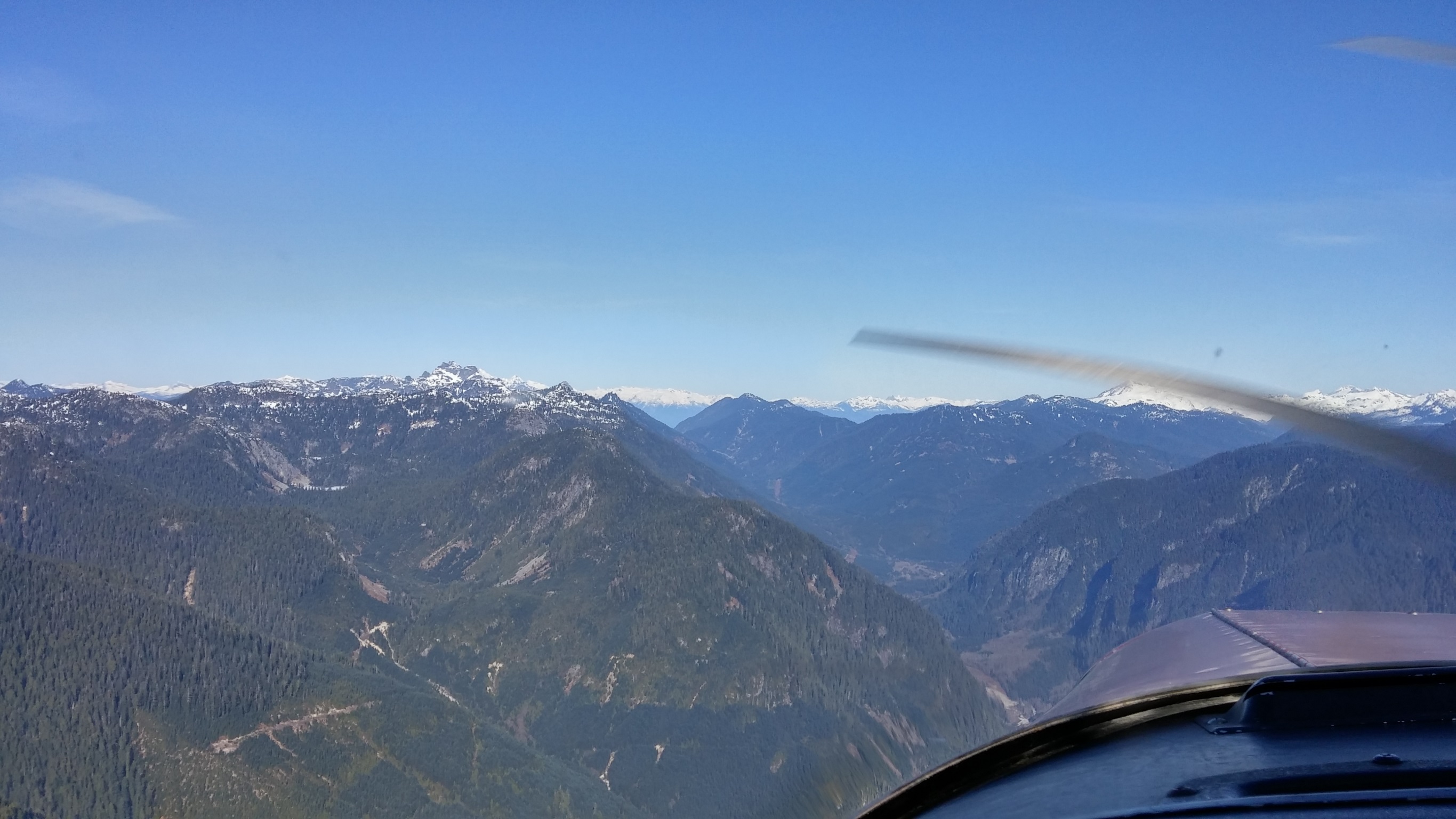 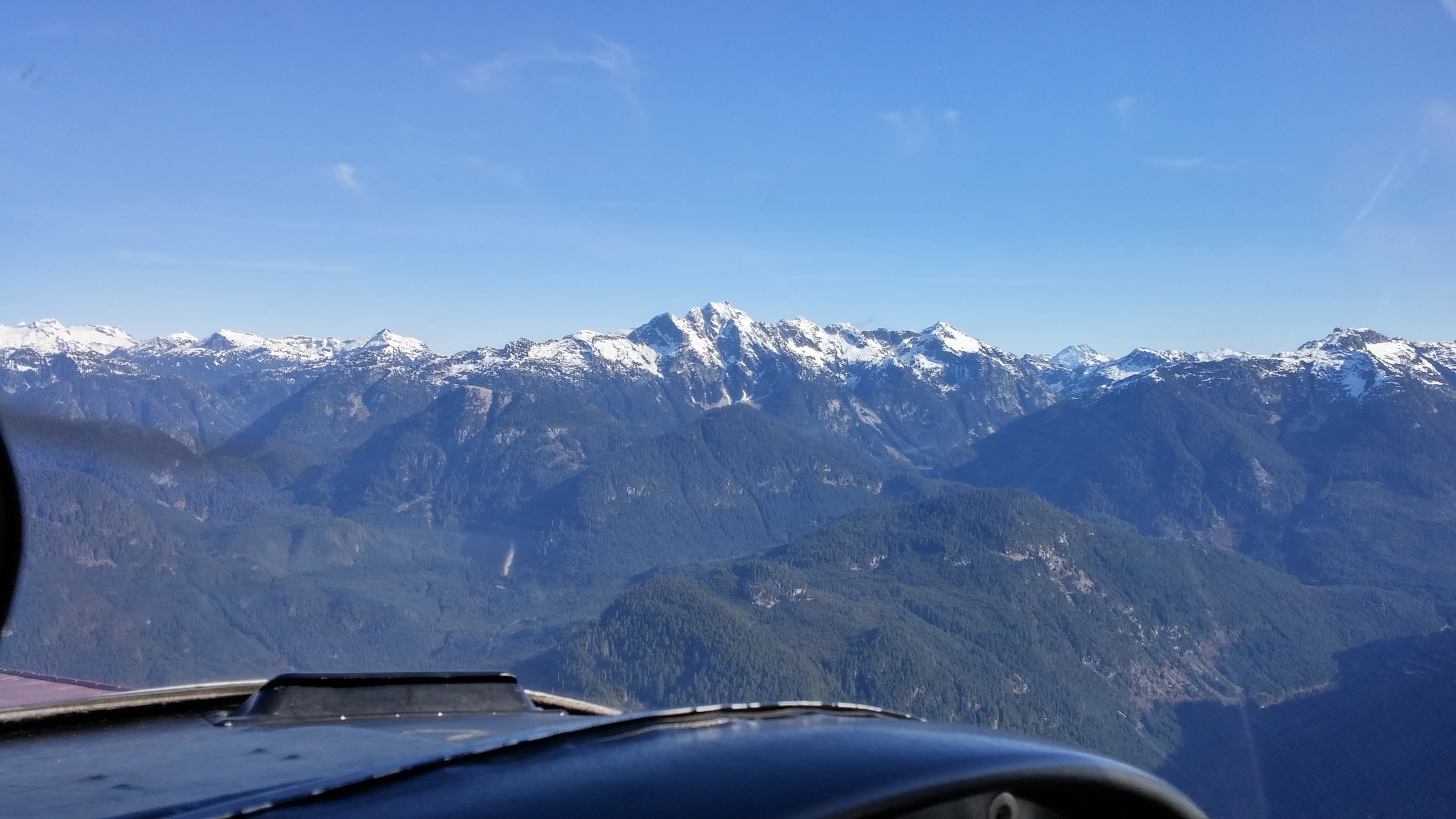 After passing Squamish and Whistler we did a precautionary and touch-and-go at Pemberton airport then headed East-Southeast down Lillooet Lake. While flying southbound I tried a few times to call up Kamloops Radio/Flight Services (126.7) for a position report but was unable to, most likely due to the surrounding mountains. Not a big deal, but I had never contacted them before and was hoping to give it a try. After a pleasant cruise down Lillooet River, I had an excellent opportunity to check out Tipella (CBB7), a 2300" gravel strip that I’d heard about online. The strip was covered in construction vehicles preventing a landing but I was at least able to take a low pass and see it for myself, although didn’t take any photos unfortunately. I’d recommend anyone who flies in the area to check it out, it’s pretty remote but being located right on the northern tip of Harrison Lake it could make for an excellent weekend fly-in camping trip.

Upon nearing Harrison Hot Springs, Mike asked if I had ever been to Rowena. I said no, and when I tried to look it up in the CFS and VNC I was unable to locate any reference to it. He pointed it out through the windshield and the closer we got to it, the more incredulous I became. It is a private gravel strip, about 1900" long and nestled right on the side of a golf course. Here is a short page on it: http://www.bcflying.com/index.php/lower-mainland/details/3/8/lower-mainland-harrison-mills-rowena-golf-course. And here is a link to it using Google Maps (hopefully this works): https://www.google.ca/maps/place/Harrison+Mills,+BC+V0M/@49.2516682,-121.9457246,718m/data=!3m1!1e3!4m2!3m1!1s0x548415f93688e743:0xbb4a3fd9f707c6b8?hl=en. In any case, I was excited to try a short, soft field landing, so agreed to give it a try. We did a precautionary fly-by first then came around for the landing. It was a full flap, full slip to the threshold landing - lots of fun! Once down, I snapped a couple pics: 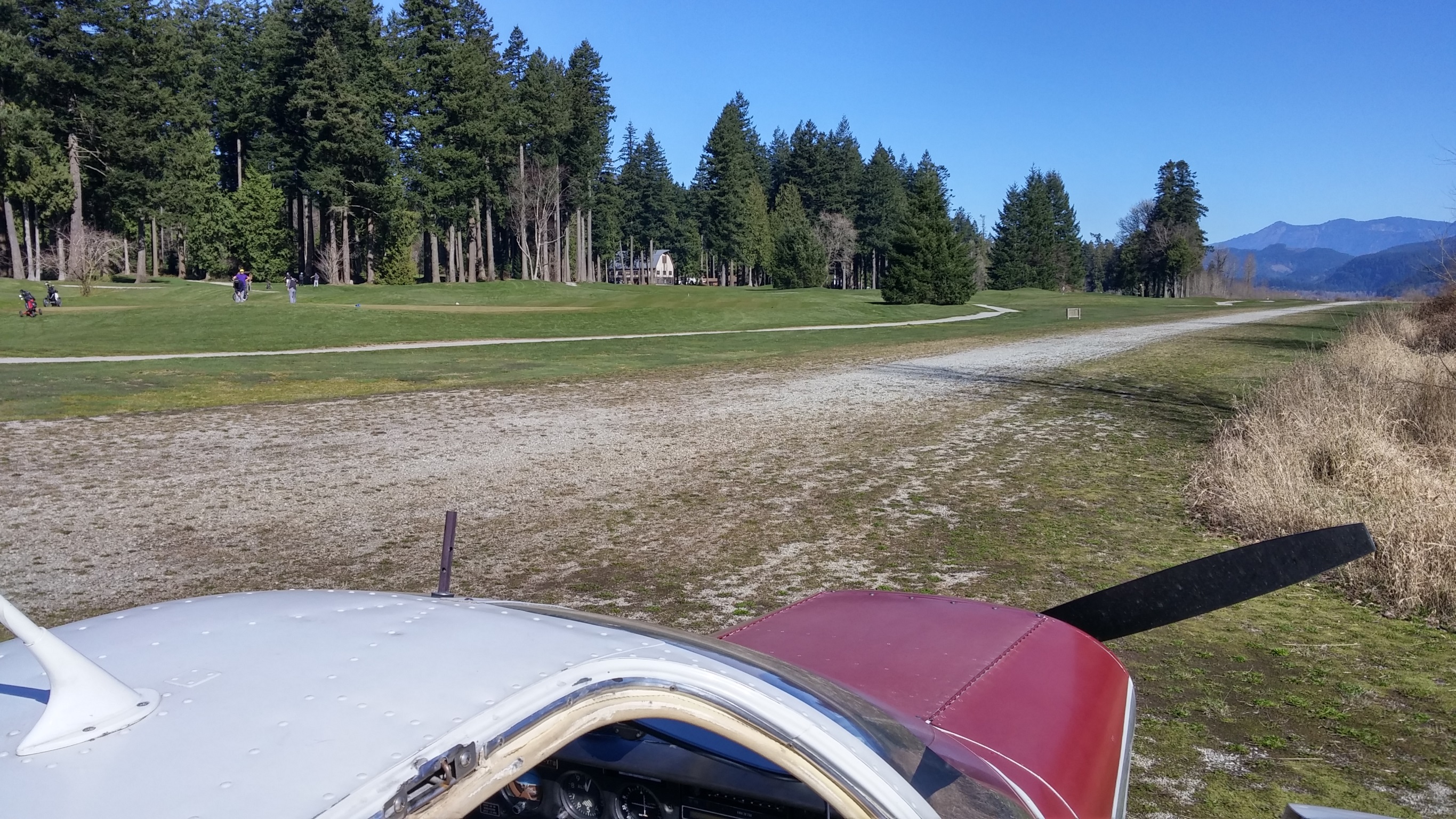 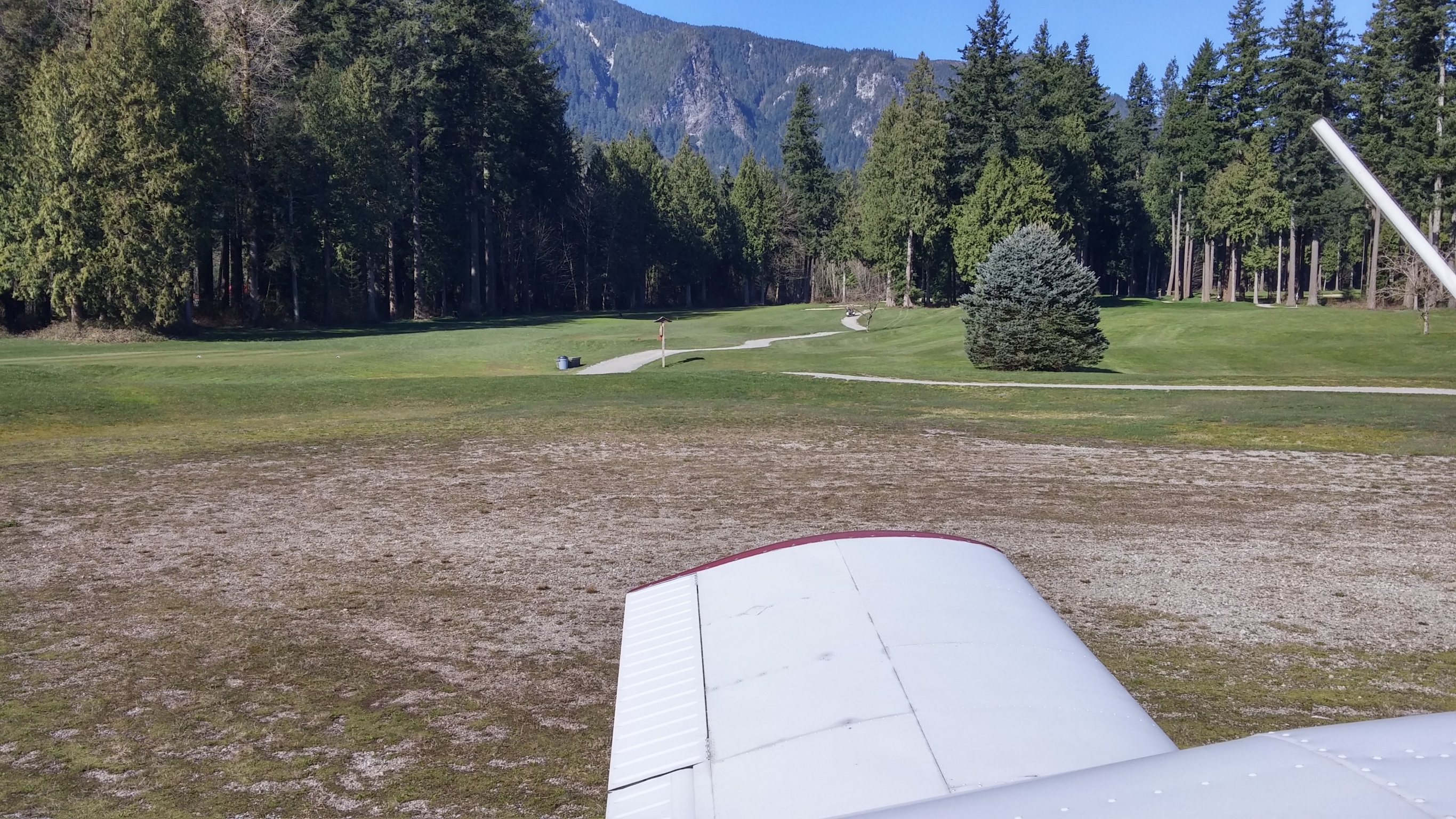 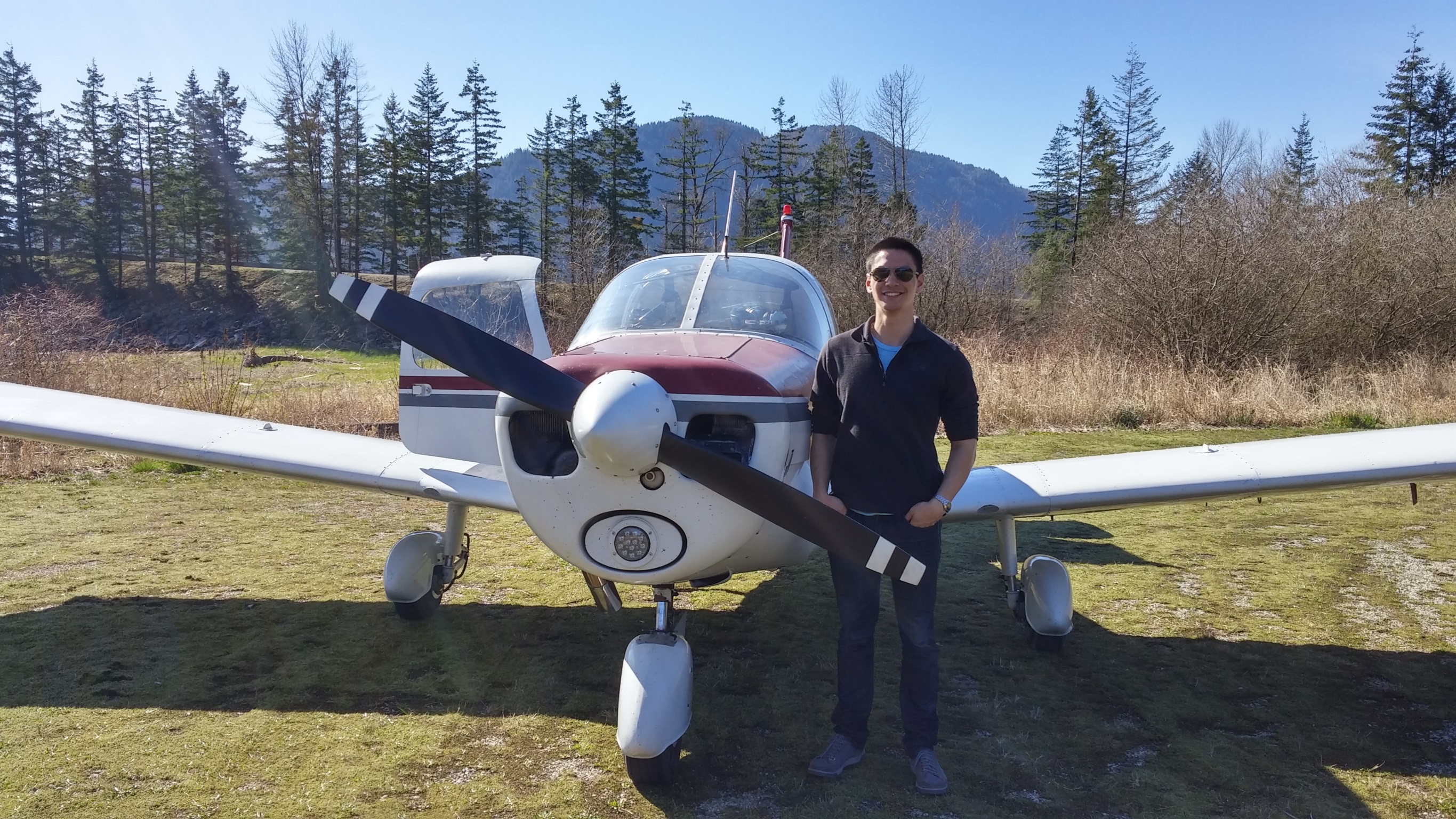 The landing was an awesome experience, one I won’t soon forget. After a short break on the ground, we departed using the short & soft field procedure and were back enroute to CZBB. We practiced a couple mountain turns in the Mission practice area (60 degree bank, 70 knots, full flaps and full power) then were back to Boundary Bay in no time.

I had a GoPro mounted for the flight but unfortunately the angle wasn’t great. Still, there are some decent shots so I will likely upload the footage to YouTube. The landing at Rowena is probably one of the most interesting parts. I’ll post the video here later if it ends up on YouTube.